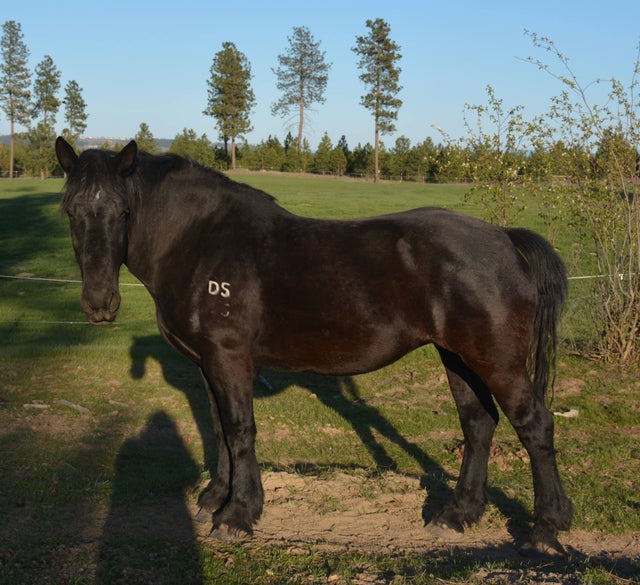 This is for a one month sponsorship of S’Mores. You can sponsor for up to 36 months. A sponsorship makes a great gift for the animal lover in your life.

Paloma is a former PMU Percheron who is in her twenties. We saved her from slaughter. She was terrified of people when she first came to the sanctuary. During this time she coliced. We drove her to WSU veterinary hospital where they found she had a hole in her diaphragm that had been there since birth. During surgery they removed 12 feet of intestine that had lodged in her diaphragm. She remained at the hospital for two months during which time she received a tremendous amount of attention. When Paloma returned to the sanctuary she was changed, not only her physical healing, but her trust.

Paloma is our ambassador equine who is a prime example of what patience and caring can do to earn the trust of someone who has been through so much mistreatment. She now follows us around much like a 2,000-pound puppy.

Sponsorship funds go toward feed and medical care of the residents at River's Wish. Sponsors will receive a certificate via email recognizing their donation.

Add to Cart
River’s Wish Animal Sanctuary advocates compassionate choices through vegan living.
Out of respect for the animals and the sanctuary’s mission, values, and vision, only plant based foods will be offered at our fundraising events, meetings, or other functions. The animals in our care represent millions of others who suffer in animal agriculture and other exploitative industries. We remember and honor them in our everyday actions and through our vegan menu policy.