Peter Jagoda | Board of Directors 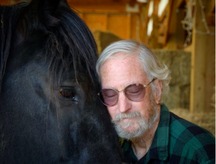 Pete has been an artist and metalsmith for over 40 years. He has been a faculty member in the fine arts department at Spokane Falls Community College since 1998; He produces work ranging from small jewelry objects to larger scale forged steel sculpture and furniture. His work has been exhibited at numerous galleries and museums including the Smithsonian, Oakland Museum, Museum of Contemporary Crafts in New York, and the National Ornamental Metal Museum. Pete and his wife Kit founded and operate River's Wish Animal Sanctuary, which cares for animals ranging from rabbits to draft horses. Pete received his MFA in Sculpture at Arizona State University.

In 1978 he started the Yuma Art Symposium, which continues as an annual event each February. The Symposium draws professional artists and university students from around the U.S. and other countries. Pete serves on the board as Artistic Director. http://www.yumaartsymposium.memberlodge.org/
​
Pete also served on the board of directors of the Society of North American Goldsmiths as well as President of the organization.

Pete grew up in New England and his first companion animal was a Banty chicken, who he named ‘Ambitious’. His little hen lived in his family’s home.
​
Some of his early recollections were seeing photos of his grandfather’s logging camps in northern Maine and hearing stories of how his great uncle would drive teams of draft horses with only voice commands. While Pete cares deeply for all animals, there is a special place in his heart for horses.

Pete has built several of the structures, fences, waterlines and more at the sanctuary. He enjoys learning and discovering how to meet the needs and care for all of the species he shares his life with.
River’s Wish Animal Sanctuary advocates compassionate choices through vegan living.
Out of respect for the animals and the sanctuary’s mission, values, and vision, only plant based foods will be offered at our fundraising events, meetings, or other functions. The animals in our care represent millions of others who suffer in animal agriculture and other exploitative industries. We remember and honor them in our everyday actions and through our vegan menu policy.